It’s a fishing tournament dreams are made of.  The MN Tournament Trail once again hosted the MTT championship on Lake of the Woods September 12 and 13.  This is a tournament anglers have to qualify for by either fishing at least 4 one day tournaments and a two day tournament or finish in the top 75 for the overall regular season points to qualify.  The grand prize was a Skeeter WX1910 boat package powered by a 200 Yamaha Outboard and the competition amongst this talented group of walleye anglers was friendly but fierce. Like any tournament, the MTT championship had MN DNR rules to follow and also the MN Tournament Trail rules to follow.  For this tournament, each team of two anglers were allowed six fish (walleyes and saugers) to the scales.  The minimum length per the tournament was 14″.  The slot limit on Lake of the Woods is 19.5 – 28″ which must be released immediately.  Anglers were allowed two “over” fish for the two day tournament.  An over fish is over 28″.  After day one, it was evident, big fish were a must to place well in this championship.

Day one saw strong south winds with cloud cover.  Anglers threw a number of presentations at walleyes all around the lake.  Jigging with frozen shiners, pulling spinners and crawlers, and pulling crankbaits were the most common methods.  Lake of the Woods held true as a trophy walleye fishery in this tournament.  Numerous teams caught one and in some cases two big walleyes on day one.  The majority of the big fish were caught in the basin pulling crankbaits. 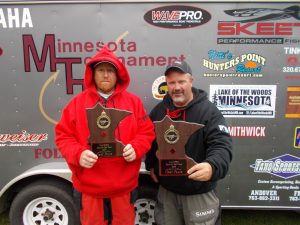 Bryan Dunaiski and Bob Nitti, 2019 MTT Team of the Year

After the weigh in that took place at Border View Lodge, the final dinner and awards ceremony took place at River Bend Resort.  Great food and drink were shared capping off a great 2019 season.

The MTT Championship is a tournament that dreams are made of.  For some, the tournament was a disappointment of not finishing as well as they would have liked.  For others, it is a memory burned into their fishing fiber for the rest of their lives.  For everyone, it is the competition against a super talented group of anglers who compete hard but overall have a strong mutual respect for each other and the passion they have in common.

The 2020 MN Tournament Trail tentative schedule is out.  All are welcome to compete, whether it is one tournament or fishing the circuit and having the chance to bring home a new Skeeter / Yamaha package.  Congratulations to the top teams.  Thank you to all.