Here is an article by Brad Dokken of the Grand Forks Herald on the record setting fish! 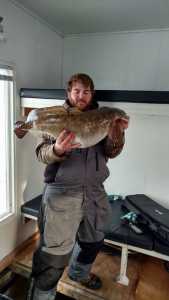 It’s all but official: Lake of the Woods is about to break its old record for the biggest eelpout ever officially weighed in Minnesota.

Brent Getzler, of Roosevelt, Minn., caught the big ‘pout, which weighed 19.67 pounds — 19 pounds, 11 ounces — on a certified scale. Once all the paperwork is complete, Getzler’s big eelpout will break the old record of 19 pounds, 8 ounces, set in February 2012 on Lake of the Woods by Aaron Guthrie of Bemidji.

Also known as burbot — among other names — eelpout are a freshwater codfish.

Getzler says he and and a couple of buddies were fishing Monday in a Sportsman’s Lodge rental house in about 26 feet of water north of Pine Island when the fish hit a “dead stick” line Getzler was fishing.

Like any good Minnesota fisherman, Getzler says he was hoping for a lunker walleye at the end of the line.

“It had a little fight,” he said. “I was hoping it wasn’t an eelpout — I can say that — but after a little bit, I figured it had to be an eelpout.”

Getzler’s first reaction to the ‘pout is familiar to many anglers.

“I’ve never seen a fish with a belly like this. It’s a pretty big belly.”

Getzler says he wasn’t thinking about a state record fish when they headed into Baudette, Minn., to weigh the burbot at Lake of the Woods Foods.

“I actually thought it was like maybe 15 pounds, to tell you the truth,” Getzler said.

As pure coincidence would have it, Dennis Topp, assistant area fisheries supervisor for the Minnesota Department of Natural Resources in Baudette, Minn., stopped by Lake of the Woods Foods at the same time Getzler was having the fish weighed on a certified scale.

“He said, ‘I’m pretty sure I can help you with that,’” Getzler said. “We didn’t know where to go next, and he just happened to find us.”

Topp said he confirmed the weight and measured the girth at 23 ⅞ inches and the length at 33 inches. The DNR assistant fisheries manager also had stopped by the grocery store in February 2012 when the last record burbot was weighed on the scale.

What are the odds?

“I’m a member of the ambulance squad, and we were having a potluck, so I was going to get some stuff, and three guys were there behind the meat counter that normally didn’t belong back there,” Topp said. “It was like deja vu.

“I actually took the girth, and we took the length, so it’s as exact as it can be. It was a really nice fish. It was gorgeous.”

That’s not a word most people would use to describe an eelpout, but as the old saying goes, beauty is in the eye of the beholder.

Topp also had DNR fisheries technician Brett Nelson stop by to see the fish. Two DNR employees must witness the fish and confirm the species,.

“All I can say is by all appearances, it was a little bit bigger than the present state record,” Topp said.

Kurre said he’s talked with Topp and expects everything will be in order. Getzlaf said Tuesday afternoon he has everything filled out and just has to get the paperwork notarized before sending it off to Kurre.

“Usually it takes people awhile to get that together,” Kurre said. “It sounds like everything’s in order and has a good chance of breaking the record, and it’s kind of neat that Lake of the Woods is breaking its own record.”

Topp said the burbot probably was about 15 years old.

As Minnesota’s soon-to-be next pout king, Getzler says he hopes to put the royal cod on his wall.

Click Here to find Lake of the Woods Lodging.

New State Record Eelpout from Lake of the Woods breaks previous LOW Record2016-12-212016-12-21https://lakeofthewoodsmn.com/wp-content/uploads/2016/04/RGB_TourismLogo1.jpgLake of the Woodshttps://lakeofthewoodsmn.com/wp-content/uploads/2016/12/MN-State-Record-Eelpout-19.67-lbs.jpg200px200px
Recommended Posts
LAKE OF THE WOODS TOURISM
FOLLOW US ON FACEBOOK!