How to Properly Release Fish 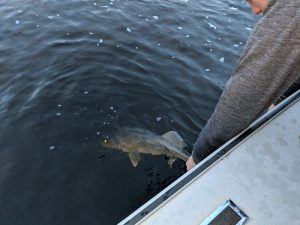 Right off the bat, fish survival will be better in shallower depths of water and when water temps are colder.  Keep this in mind.  For instance, if you have a good walleye bite going in 36 feet of water in August, the mortality rate will be higher on release fish vs releasing those fish in 20′ of water or in colder water.  Consider catching a few and moving on to shallower depths.
The technique we use to catch fish also helps determine survival.  For instance, catching a fish on a jig typically means the fish is hooked in the mouth as you set the hook right away upon feeling the bite.  When using a live bait rig in which you have to let the fish “take it” for a bit, the chances of a fish getting the hook deep is higher.  When a fish has a hook that is deep, actually snipping the line off is the fishes best chance of survival vs doing surgery and ripping the hook out, regardless of how careful you are.
There are a number of tips to increase the odds of a fish surviving when releasing it.  A main tip is plan ahead.  Have your needle nose pliers, jaw spreader, measuring board and camera all ready to go to save time.  The quicker you can land the fish, take the fish out of the net, remove the hook, possible snap a couple of pictures and release the fish back into the water, the better.
It is important to understand how to properly hold a fish not only for properly releasing it but also to minimize cuts and getting stuck.  Small fish are less of a challenge than large fish.  Anglers will learn fairly quickly how to grab a perch or white bass and not get cut up by the sharp gill plates.  Sunfish anglers know the technique of smoothing back the top spiny fin.  And for those parts in which catfish and bullheads are popular, understanding how to navigate your hand around the two side and one top fins that have barbed spines in them is important.
On Lake of the Woods, the majority of releasing involves walleyes.  One way to hold a walleye is by the hard cartilage area in their gill area. Make sure you hold them by the tough cartilage that makes up their gill structure in their head area but do not actually touch the red gills in which they pull oxygen from the water to breathe.  Keep your fingers on the outside of their actual gills. Their actual gills are red and should not be touched or grabbed. Take two or three fingers and slide them along the outside of the gill area up into the tough cartilage of the walleye.  When using this technique on fish over 10 lbs, try and support their body weight by placing your second hand under their belly and holding them horizontally vs vertically.
Bass and crappies are typically held in the mouth as they don’t have sharp teeth and their mouths are inviting as they are big and easy to grab.
Pike and muskies are typically held within the hard cartilage of the gill area with one hand with the other hand supporting the body weight of the fish horizontally if it is a big fish.  Keeping control of these predators during the release will improve their odds of survival.
In the old days, it was common for anglers to hold pike by the eyes.  This is frowned upon as it will blind the fish.
Lake sturgeon, well, these can be huge fish and there are a few tips to a successful release.  Consequently, it is important not to hold these fish vertically.  They are so heavy, internal organs and tissue can actually tear from their weight.  Remember, in nature, these fish swim and live horizontally in water.  Holding them vertically can simply be too much weight for their internal organs to handle.
During the release process, don’t hold sturgeon by the cartilage in their gills if they are too big.  It can actually be best to have one hand on their tale as it is firm and easy to grab with the other hand supporting the body weight of the fish under its belly and holding it horizontally.  If the fish is really big, it will take two people to cradle the fish!  If you don’t need to bring the fish in the boat, some anglers will pop the hook out while the fish is in the water next to the boat or even in a net if using a net large enough to hold a big sturgeon. Really try not to drop fish or touch touch their eyes during the release.  Dropping a fish can lead to obvious damage.  Touching their eyes can make them blind.  When releasing a fish, it is also important to try not to remove the slime from a fishes sides.  This is a protective coating against harmful parasites, etc to the fish.  As many of you know, a couple of fish with a lot of slime is a pike or a muskie.  Pike often carry the nickname, “slimer”, and for good reason.
When you release the fish in the water, use more of a side by side motion vs forward and back to get water into it’s gills. Forward and back can actually drown a fish. Support the fish upright and slowly go back and forth until the fish makes the effort to swim on their own.  If the fish is tired out from a long fight and the process of being out of the water, it may take a few minutes.  Have patience, the fishes life depends upon it.
To find out more about fishing Lake of the Woods, check out www.LakeoftheWoodsMN.com
For a list of lodging options, check out www.LakeoftheWoodsMN.com/Lodging
How to Properly Release Fish2021-06-092022-06-09https://lakeofthewoodsmn.com/wp-content/uploads/2016/04/RGB_TourismLogo1.jpgLake of the Woodshttps://lakeofthewoodsmn.com/wp-content/uploads/2021/06/walleye-release-next-to-boat-scaled-1.jpg200px200px
Recent Posts
LAKE OF THE WOODS TOURISM
FOLLOW US ON FACEBOOK!