Lake of the Woods is a world class muskie fishery with over 65,000 miles of shoreline and 14,552 islands.  Plenty of space that houses a strong population of “skies” with many of these fish reaching lengths over 50 inches. Contents hide
1 Rules on Fishing Ontario Waters while Based in the Minnesota waters of the NW Angle.
2 Learn from an experienced muskie guide.
3 Careful handling makes catch-and-release work.

Rules on Fishing Ontario Waters while Based in the Minnesota waters of the NW Angle.

Since COVID, the border closure and now the border reopening, there has been a lot of confusion on boating and fishing in Ontario waters when departing from the U.S. waters of the NW Angle.

In a nutshell, if you are boating into Ontario waters to fish and do not touch land, touch a dock, anchor or exchange goods or services, you do not have to call into Canada Border Services Agency (CBSA) prior to boating into Canada.  You can boat into Ontario waters, fish as long as you wish (understanding you cannot bring any bait, alive or dead, across the border, must have an Ontario fishing license and adhere to the Ontario Ministry of Natural Resources rules).

If you plan on touching shore in Ontario, you will have to fill out the ArriveCan App each day and call CBSA at the 888-CAN-PASS number for permission to enter Canada.  Adults in your party will also have to be vaccinated and kids either vaccinated or producing a valid COVID test.

Learn from an experienced muskie guide. Resorts up at the NW Angle amongst this muskie nirvana specialize in muskie guides. These muskie nuts keep a good handle on fish movement, lure preference, colors and areas muskies are prevalent.  It is also a great way to save time really learning the nuances of becoming a better muskie angler.  Often times there are patterns happening on the lake that can save you time and lead to more success in finding and getting muskies to eat.  Check out a list of NW Angle Resorts who can set you up with some of the best guides in the business.

Many of the muskie guides are extremely passionate about muskies, so much so that after guiding all day long, they often pursue muskies in the evenings on their own.  It is fun to talk to anglers with such passion as they will share trends and nuances others may not pick up on.  Things like not having to throw the largest baits, in fact, in many cases, a smaller or mid sized bait might actually be more effective.

For those that just love the sport, here are some tips on safely practicing catch and release:

A big muskie is an old muskie. Females require 14 to 17 years to reach 30 pounds. Northern pike grow even more slowly. Once taken out of the water and hung on a wall or carved into fillets, a trophy is not soon replaced by another fish of its size. So, the key to creating trophy northern pike and muskie fishing is catch-and-release angling. Unfortunately, some fish are mortally injured by improper handling and cannot be successfully released.

The first step to successfully releasing fish is to use artificials rather than live bait. The second step is to keep the fish in the water if at all possible. Caught on artificials and handled carefully, nearly all fish can be returned with no permanent injury. Here are some effective methods, courtesy of Muskie Canada, for handling large northern pike and muskie: If you must lift a big fish from the water, support as much of its body as possible to avoid injuring its internal organs.

Never grip a fish by the eye sockets if you intend to release it. By doing so you abrade its eyes, injure the surrounding tissue and may cause blindness.

Muskie anglers are a very passionate breed, often fishing from dawn to dusk.  They also have the deepest respect for muskies and overall do an excellent job of making sure these ultimate predators return to the water unharmed.

Best of luck to all muskie anglers this year.   The muskies have been active this spring, just ask our walleye anglers! 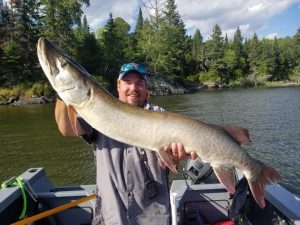 Click Here to return to Lake of the Woods Tourism.

NW Angle… The Perfect Spot to Target Lake of the Woods Muskies2022-06-162022-06-16https://lakeofthewoodsmn.com/wp-content/uploads/2016/04/RGB_TourismLogo1.jpgLake of the Woodshttps://lakeofthewoodsmn.com/wp-content/uploads/2018/08/tammi-law-nw-angle-muskie.jpg200px200px
Recent Posts
LAKE OF THE WOODS TOURISM
FOLLOW US ON FACEBOOK!